What Being A CEO Actually Means

What Being A CEO Actually Means 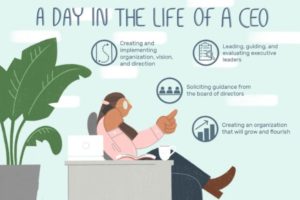 The CEO title is one of the most commonly used in the business space and many times used without a proper understanding of the role and the responsibilities it carries. We have set out to define what it means and given a break down of the attached responsibilities.

CEO which is the acronym for Chief Executive Officer is defined by Investopedia as the highest-ranking executive in a company, whose primary responsibilities include making major corporate decisions, managing the overall operations and resources of a company, acting as the main point of communication between the board of directors(the board) and corporate operations, and being the public face of the company. A CEO is elected by the board and its shareholders.

In the website www.corporatefinanceinstitue.com, a CEO is defined as the highest ranking individual in a company or organization and is responsible for the overall success of a business entity or other organization, and for making top level managerial decisions. Although the CEO may ask for input on major decisions, he/she stands as the ultimate authority in making final decisions. Other titles for CEO include Chief Executive, president and managing director.

Roles and Responsibilities of the CEO

The CEO, together with ensuring the overall success of the company, he/she is responsible for leading the development and execution of longterm strategies, with the goal of increasing shareholder value.

The roles and responsibilities of a CEO varies from one company to another depending on the organizational structure and size of the company. In smaller businesses for instance, the CEOs also acts as operations managers. In this role, the CEO makes sure the company is turning a profit while producing products and services in an efficient manner. They also make sure these products and services are available to customers quickly enough to beat the competition. They keep a close eye on market trends and demands to ensure they stay ahead of other companies. When needed, they establish cost-cutting measures to utilize company resources efficiently.

Of all the CEO’s responsibilities in a small business, possibly the most important duty is to publicize and promote the company and its products or services. The more the buying public is made aware of a company or brand, the more likely profits will follow. Gaining new business is done by being part spokesperson and part goodwill ambassador when dealing with people. CEO’s often represent their company at conferences, stockholder and board meetings and corporate events. To the public, a Chief Executive Officer is the company. By doing television and radio interviews, webcasts and writing articles for trade journals and consumer magazines, a CEO is able to generate positive publicity for the company.

Although there are no standardized list of roles and responsibilities of a chief executive officer, according to the www.corporatefinanceinstitue.com, the below listed is a typical list of duties, responsibilities, and job description of a CEO;

A Chief Executive Officer, or CEO, is essentially responsible for every decision that is made within a company. The job can be very demanding, but also very rewarding when the company succeeds because of decisions that were made at the top. Whether the head of a huge corporation or small business, the CEO nevertheless plays a major role in the ultimate success or failure of a company. However, despite a company’s size or structure, a CEO who is able to demonstrate qualities of communication, leadership and experience will no doubt be able to bring high profits to a company.

If you are having any questions, please feel free to ask.

Send us an email